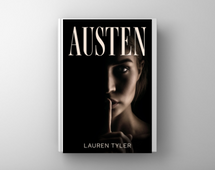 ✨ FOUR WEEKS ✨until Austen is available on Kindle at midnight.

It was a business recipe that had to be carefully measured out. A splash of teenage crush to keep him coming back for more, a dash of innocence, a cup of secrets, and a whole lot of fear that one wrong move would poison them both.

Ten years ago Remington Austen’s life changed for the better after being left for dead. Under the watchful eye of two men from her past, she realizes it’s time to take control of her own life. Once upon a time, someone gave her a second chance, maybe it was time to return the favor.

Ethan Sullivan has a reputation to protect. For his entire adult life, he has been happily married to the same woman who blessed him with children and a stable household, but as a detective with the Ada County Sheriff’s office, he spent more time on the streets chasing bad guys than attending birthday parties and bath time. He knew he wasn’t perfect, but he was doing everything he could to make it look that way to everyone else.

With a reputation as a player and rogue undercover cop, Lucas Beck can usually only be trusted with one thing—getting the job done. He has no interest in moving up the ranks or settling down. When his friend asks him to go undercover to help catch a trafficker, he finds himself face to face with the past and the only secret he kept.

As the three enter into an incalculable undercover operation, they find that their individual secrets will only remain hidden for so long. Friendships are put to the test, trust is questioned, and no amount of preparation can keep the past from repeating itself. The question is will they get out alive and what will they have to sacrifice to do so?

✨Pre-order now to find out what happens!✨

Special THANKS to @inkandearthstudio, Fusion Creative Works, & many more to come for their help getting Austen ready for you to read!