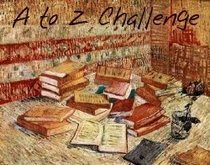 My second year with this challenge. I didn’t complete the challenge in 2008, but at least I had fun doing it. Since I joined late last year, I think I have a better chance of getting all letters in this coming year.

I’m choosing Option C: Read both authors A to Z and titles A to Z (52 books; this is the challenge Joy created). You can see all the other options and details HERE.